Hello lovely readers! It is almost Halloween! This is one of my favorite holidays. I think in a lot of ways, I even like it more than Christmas. Normally, I have my place all decked out, and an awesome costume prepared, creepy Halloween music queued and so much excitement!

This year has been... different. Part of it, I suspect is that my boys are starting to "outgrow" it as many do, save yours truly. They weren't interested in helping decorate. My oldest just wants to stay home and hand out candy so he "doesn't really care about a costume".

Even my husband is not feeling it this year. The last two years at work he has won best costume contest, but just feels like there is too much pressure. At the last minute he ordered a knock off version of his recreation of " The Dude"  I thought his Deseret Industries throw together for the Dude two years ago was better. It was more creative. 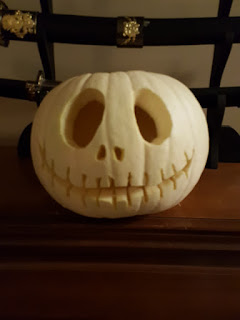 Pumpkin carving was kinda cool, but our pumpkins died in days. So depressing.


I tried watching scary movies with my boys to get in the mood. (OK, to be fair, in our world of scary that meant Scooby Doo, and the 1984 Monster Squad, despite their vehement calls for Walking Dead, which they still think I am a meanie for not letting them watch.) But still, nothing...

I got this great album from my friend Daniel, called Heretica: The Night Keep. You can check it out on his website
All purchases this month, he contributes to Scares that Care. Daniel is incredibly talented. I love his music! He was generous enough to let me use some of his music for The Hunter's trailer, and I will probably be using some pieces in the audiobook once I get that worked out. (I know, I have been working on that for almost a year... long story about learning new skills!)

And still, nothing. I have not decorated, I am going to half-ass last year's costume, I will probably play Daniel's awesome album on Halloween night while my oldest and I hand out candy.

I want to blame the fact that Christmas decorations were out before I even got to decorate for Halloween, but I think it is more than that. I need to get my mojo back.

What are your plans for Halloween? Let me know in the comments below.
Posted by chickangell at 6:00 AM