Book review: The Road of Darkness by Zoe Ambler 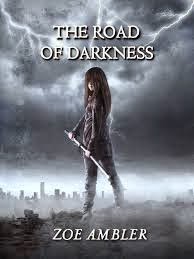 I really want to enjoy this book.... and I must have, because I finished it eagerly in one day, despite having a lot of house work and several chapters I was supposed to edit... Yeah. I couldn't put it down. It is the story of a young woman from New Orleans who was raised by a voodoo-practicing slave-nanny and ends up getting changed into a vampire because she snuck off to buy some supplies for her own voodoo practices.

Her soul is given to Baron Samedi and we get to see her go through history learning to survive and thrive as a vampire. There are exciting introductions to different species of vampires, to other supernatural creatures, and to demons. The book has so much to love....

I have to say something about the writing. Usually I am a major stickler for poor writing. There are six books that I have not finished reading in my life. One just recently was made into a major motion picture. Because of that, it gave me pause to say anything. Clearly there is a large mass of readers who don't care.... and there is another book that was made into a motion picture recently that is grammatically well written and I have spent almost three months trying to get through, so I obviously enjoyed this error-riddled book more than those other book which shall remain nameless...

But as a writer, I cannot bring myself not to discuss it. This author is the perfect example of a writer who is a master story teller, but would benefit SO MUCH from having an editor. She did a fantastic job with writing in dialect. And someone obviously did some work editing (though it wasn't obvious until I got to the last handful of chapters where it really fell apart!) but I know high schoolers who could have done a better job editing. Seriously.

There were a couple of pet peeves that really drove me nuts, that could have been fixed by a best friend reading through and wouldn't have cost the author a penny. (It is per se, not per say. You start a new paragraph when you change speakers, and spell check is a must!! In this modern age, there is no excuse for misspelled words. Homophone errors, perhaps, but not straight up misspelled words!)

But really every author should have a professional editor. I provide editing for other authors, and I hire someone to edit my books. Even if you do not have a budget to have the book edited, there are ways to trade favors with other authors, give new editors a chance to build their chops, get beta readers, so many options.  I hope the author does that. Pull the book and get some people to read it. Polish this diamond in the rough and buff that baby straight up because I really want to read this series!!!
Posted by chickangell at 7:00 AM